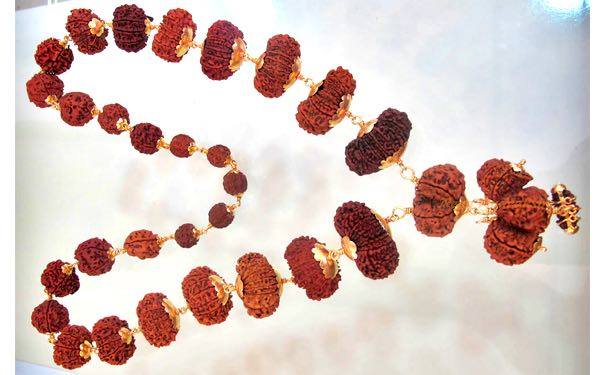 Buy Indrakshi mala Online at best price
Indra Mala is very powerful product.It Costs 1.5 Lakhs Rs. Discounted Price 1.05 Lakhs Rs.
It is made up of all the Rudraksha beads from 1 mukhi to 21 mukhi, Gaurishankar, Ganesh Rudraksh, Kamal Rudraksh, Sawar, and Trijuti which is the rarest of all the Rudraksha combinations ever found on this planet, strung face to face and tail to tail as stated in our ancient Shastras. Moreover it is strung in gold caps and woolen spacers are used to protect the beads as well as provide Asana (seat) to all the beads in the Indra Mala. �Indra Mala symbolizes the pinnacle of achievements whether in material world or the spiritual universe.This mala is the king-of-kings, an emperor in its own right and therefore elevates the wearer to the level of Indra, the king of gods. Due to great rarity of the beads it is a rare possession and it may take months to deliver the Indra mala and only a few lucky ones can hope to acquire this.For the successful achievers and people who want to reach the top levels, wearing of the Indra Mala is considered most auspicious by the great epics. Indra Mala is a unique configuration which never lets wealth go away from the family.It is passed from one generation to another, and ensures that wealth stays within the family for generations. Possessing an Indra Mala is like having a magically blessed divine light, which will show the path in times of distress and crisis. Ancient texts say that possessing this mala is like having entire universe in your control.Indrakshi Mala is a powerful combination made up of one bead each of one mukhi till 21 mukhi and Trijuti according to the description in Katyani Tantra strung in interpretation of Rudraksha Ratna Science Therapy. It is worn as a set of neck mala and wrist malas. Indrakshi Mala is known to be the most sought after possession which only few blessed persons in the world own. According to the ancient scriptures, the universe tends to obey your wish as a command once you possess Indrakshi Mala. It may be strung in gold or silver. The mala is prepared using Nepal beads.
According to Katyani Tantra:

ome comments on my video

Happy International Women’s Day.Most Women Come To Me Not To Consult For Themselves But